Free and Open to the Public Outside, in front of the US Bank Building

This is a Private Show

There is Free Parking behind the church, off of Central Street.

On the Front Porch of the Host's House

Three satellite parking areas along 45 Highway will be available to the public with free shuttle service to and from the event. See the website for locations.

The "Main Street 1849" venue starts at Main & Kentucky Streets and extends south on Main Street to Kansas. The stage will be the last area on the southeast side.

This will be in the lawn area between the library and the parking garage to the south of the library. In the event of inclement weather the concert will be held at Watkins Museum at 1047 Mass St. For more information, contact Duane Peterson 785-832-7940.

Doors open at 7:00. We would like to have a large turn-out to help this new venue, which is the type of place that Kansas City has needed for a long time.

Free and Open to the Public Outside, in front of the US Bank Building

The Brown Bag Lunch Concert scheduled for Thursday, July29, 2021, has been postponed to Wednesday, August 4 due to the heat advisory. The time and location remains the same: 12:00 - 1:00 in front of the US Bank Building at 900 Mass St. in Lawrence. Hopefully, it will be cooler.

From the Sedalia Newspaper Saturday, June 1, 2019 at the Scott Joplin Ragtime Festival 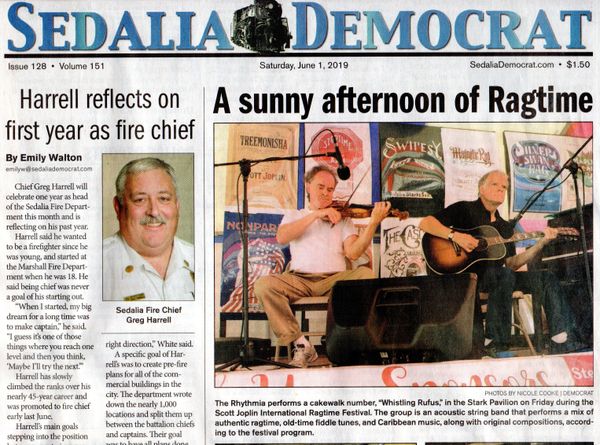 Click on "Reviews" above to see a review by Jack Rummel of "The Rhythmia is Fine and Dandy" CD.

The Rhythmia is an old-time acoustic string band that performs a mix of authentic ragtime, primarily written and published in Kansas City where the band is based, old-time fiddle tunes, and Caribbean music, along with original compositions, to form a variety of old-time folk dance music.

Over a hundred years ago, ragtime was America's original popular music. While considered primarily as piano solo music today, ragtime was often played during the late nineteenth and early twentieth centuries by string bands consisting of violins, mandolins, guitars, and banjos. The Rhythmia is keeping this ragtime string band tradition alive. They also explore the Creole and Latin music of the Caribbean and Louisiana from the same period because of the many similarities to ragtime.

Kevin's interest in local music history has led to published articles in The Rag - Times and The Kansas City Rag - Time Revelry. He has given symposiums on ragtime music and was interviewed for Uniquely Kansas City, a television documentary on the history of the arts in Kansas City, produced by the local PBS station KCPT-TV. Kevin was also featured in a National Public Radio special report on the famous Kansas City dancer Doc Brown, as well as two PBS-TV specials, The Cradle of Ragtime, and In Ragged-Time, a concert at Mississippi State University. In addition to performing, Kevin has written several songs, instrumental pieces, and a musical titled Armourdale, based on historical true stories.

Although classically trained, Pat developed an early affinity for earthier forms of music and was a frequent competitor in old-time fiddle contests, of which he has won many. Pat is a music teacher and a prolific composer who has written in many musical genres. His CD releases include Fiddling Legacy, a CD of traditional old-time fiddle tunes, and The Original,  a CD of his original fiddle tunes. He has experimented and explored Jazz-Rock fusion and contemporary Free Jazz, resulting in two bands, Sextant, in the late 1970s (no commercial releases), and The Unbound (Jazz Recidivists, Tapestry 76001-2) in the 1990s. More of his original compositions, including a Latin style of contemporary Jazz have been released on two solo CDs: The Business of Pleasure (no label) and I’ll Give You Paradise (Enneagram). These recordings include the use of the electric violin.

The Rhythmia's performance may be presented in part by the Mid-America Arts Alliance.